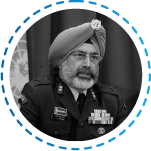 Lt. General Iqbal Singh Singha is the Director of Global and Government Affairs at TAC Security. With nearly four decades of experience in conflict resolution and conflict management, this highly decorated Indian Army General has attained many challenging and varied appointments in India and abroad.

A negotiations and mediation expert, he has represented the country in United Nations peacekeeping on two different occasions on deputation. As Head of the Mission and Force Commander at Golan Heights between Syria and Israel, he has closely worked with the governments of both the countries and diplomatic community representing over 60 countries. He has also addressed the Security Council on two occasions on prevailing situation on Middle East.

In his free time, he loves playing golf, traveling, reading and spending time with his family.

“It is a great privilege to be working with a company which is a global leader in information and cybersecurity. Dedication, passion and innovation of TAC Security’s workforce has helped the clients grow securely.”

Lt. Gen Singha Addressing the security council at the UN